Your eye in the pipe: Turbidity meters

The inline analysis of media based on their turbidity values enables automated, high-precision application in many processes. These are primarily product differentiation, phase transition, process control and quality monitoring ... 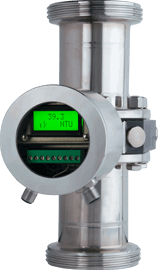 Turbidity measurement for very low turbidities in pipes from DN25

Turbidity measurement for very low turbidities in process and drinking water applications, in pipes from DN25

How can turbidity sensors help optimizing processes and saving cost?

In many applications in the fluid food and beverage industries, turbidity measurement is the most suitable analysis technique for differentiating liquids in the process inline. With the hygienic turbidity meters of the ITM series, processes can be monitored with high precision and controlled in real time. With two different methods of measurement, Anderson-Negele hygienic inline turbidity sensors offer the appropriate turbidity measurement principle for every degree of turbidity: from the lowest measuring range of 0…5 NTU (0…1 EBC) for slightly turbid media to the measuring range of 200…300,000 NTU for products with medium and high turbidity. Since fat particles display the same behavior as solid particles or other turbidity substances when measuring turbidity, dairy products such as milk or cream can also be analyzed very accurately. Here are only a few examples for turbidity values of different media and their alterations in varying concentration:

What are typical applications for hygienic inline turbidity sensors?

The inline analysis of media based on their turbidity values enables automated, high-precision application in many production processes and application areas. These are primarily product differentiation, phase separation, process control and quality monitoring.

by differentiating between liquids, the correct processing, storage or filling of products can be ensured, for example:

in combination with conductivity measurement, inline CIP control down to the second is possible:

if the turbidity level rises above or falls below a certain preset value, a process correction can be triggered by a signal to the process control PLC. Typical applications are:

Furthermore, the concentration or the turbidity level of certain products can be monitored:

In which industries and applications do hygienic turbidity sensors make sense?

In a variety of production processes and in CIP systems in dairies, breweries, the beverage industry, wine production, juice production and other food companies, turbidity sensors can measure liquids according to qualitative criteria in real-time and fully automatically. This allows, among others, to:

Which other methods can be replaced by turbidity measurement?

In practice, the degree of turbidity is often not easy to detect, but it can be decisive for the quality of the end product and the efficiency of the process. Still frequently used methods of control are manual sampling or turbidity monitoring via a sight glass. However, experience shows that both of these methods involve high personnel costs and uncertainties in the quality between samples.

Another common option for certain applications such as CIP cleaning is the time-controlled phase change. However, a safety buffer of several seconds must be taken into account to ensure that no incorrect product or cleaning agents enter the product tanks. This results in costs for each phase change, as many liters of valuable product or cleaning agent end up in the waste water.

The Anderson-Negele turbidity meters of the ITM series can automate this process step with a very high measuring accuracy. This prevents loss of resources due to media being discharged incorrectly or too late and personnel costs due to visual or manual control, thus saving money. In many practical cases the use of an Anderson-Negele turbidity sensor has been amortized within a very short time.

Basically, the Anderson-Negele turbidity meters are divided according to their measuring principle into relative turbidity sensors with backscattered light method and four-beam turbidity sensors with recording of the measured values of transmitted and scattered light. Both are inline measuring methods, i.e. they analyze the liquids in the running process. Due to the extremely fast response times of less than 1 second, the processes can be monitored and controlled in real time.

What is relative turbidity measurement?

The main advantages of this measuring principle using the backscattered light method are the flush inline installation of the sensor in the process and the favorable price. Thanks to a wide range of process adaptations, the ITM-51 can also be easily integrated into existing pipes from DN25 upwards at a later date, in compliance with internationally recognized hygiene guidelines such as 3-A and EHEDG.

From a diode at the tip of the sensor, an LED light source emits infrared light into the medium via an optical system made of highly resistant sapphire. The particles present in the medium reflect the irradiated light, which is detected by the receiving diode in the sensor tip (so-called backscattered light method). The electronics calculates the relative turbidity of the medium from the received signal. This measuring method is ideal for measuring media with medium to high turbidity (200…300.000 NTU).

What is four-beam turbidity measurement?

In the ITM-4, turbidity measurement using the transmitted light / scattered light method is carried out using the 4-beam alternating light method, also with an LED light source. The main advantage of this measuring principle is the very high measuring sensitivity. With its measuring ranges starting from 0…5 NTU (0…1 EBC) even the slightest changes in turbidity are registered and output.

Two infrared transmitters and two infrared receivers are arranged in the ring-shaped measuring sensor, each offset by 90°. The transmitters are controlled alternately to determine the turbidity value. If transmitter 1 is active, receiver 1 registers the transmitted light and receiver 2 the 90° scattered light. If transmitter 2 is active, it is reversed. An exact turbidity value is determined from the four measured values of a measuring cycle. Since a transmitted light reference measurement value is also available for each 90° scattered light measurement value, disturbing factors such as contamination of the optics or component aging are automatically compensated. Interfering influences from sporadically occurring solids and air bubbles are suppressed by evaluating several measuring cycles and an adjustable filter. The ITM-4 is integrated in a ring-shaped fitting that can be installed in pipes from DN25 to DN100 or DN1″ to DN4″ by means of a hygienic screw fitting or clamp connection.

This measuring method is also used for the ITM-4DW. In this variant, the material for the sensor is specially adapted and approved for drinking water applications but is therefore less expensive than the ITM-4.

Which turbidity sensor fits best to your application?

The turbidity sensors of the ITM series are designed according to international standards for food processing equipment such as 3-A, EHEDG and FDA. This includes the avoidance of dead-legs and the easy cleaning. The entire sensor from the wetted parts to the housing are made of the highest quality materials:

Thanks to their extremely robust and durable long-life design and, for example, the use of an LED light source, the sensors can withstand even the highest mechanical stresses such as vibrations and pressure surges, which occur repeatedly in many real-world applications, and ensure the highest accuracy, durability and cleanability.

Which process adaptations or installations are possible for turbidity sensors?

A large number of different process adaptations ensure great flexibility with regard to installation in new plants and retrofitting in existing processes. The compact ITM-51 is front flush and can be easily integrated into the process via hygienic screw or clamp fittings. Adapters are also available for existing process connections. A remote version is also available, which ensures optimum adaptation to on-site and technical constraints. Both ITM-4 and ITM-4DW are equipped with a ring-shaped measuring sensor integrated in a housing. This can be easily integrated into pipes of various nominal diameters by means of hygienic screw or clamp connections.