Turbidity measurement in the brewhouse

The first and decisive step in purifying the wort takes place during lautering in the brewhouse. Too high solid concentrations, which can be caused by excessive husk ratios for example, can lead to fermentation problems and therefore to a reduction in the beer quality.

The inline turbidity measure has now become a widely used and recognised process for the automated monitoring of the solids concentration. However, in many places this process is still controlled by time and quantity, or even by visual inspection using an inspection glass. The Bürgerliche Brauhaus Saalfeld successfully uses the Anderson-Negele turbidity meter for control and monitoring during the purifying process.

The mash is pumped into the lauter tun following mashing in order to separate the beer wort from the malt and spent grain solids. A filter cake forms by settling of the spent grain after a sufficient rest time in the lauter tun and the wort can be removed through the perforated false bottom. The draining of the wort changes the effective cross-section of the capillaries and therefore the porosity of the filter layer. The spent grain cake is sliced by an adjustable raking device at the correct time in order to ensure consistent drainage.As the first wort initially has a higher proportion of solids it is initially fed back into the lauter tun through a control valve in order to pass through the filter once again. The wort is only forwarded to the wort kettle once it is sufficiently clear. This inspection is extremely important as the withdrawal of an excessive proportion of husk can lead to fermentation problems and therefore to a reduction in quality. 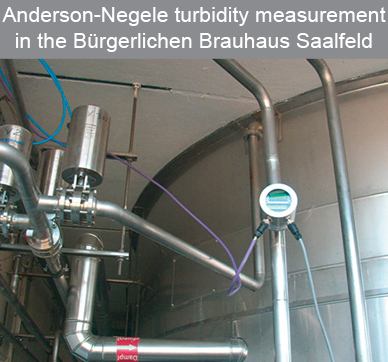 The turbidity meter type “ITM-3” monitors the turbidity of the wort in the lauter tun collecting main (see fig.) during the entire process and controls the changeover valve for the loop or wort kettle. To start purifying, the wort is first pumped in the loop until the target turbidity value is reached. Only now is the wort sufficiently clear and is forwarded to the wort kettle. If the target value exceeds a defined threshold in the following process, e.g. slicing or sparging, an automatic switch to the loop takes place. A malfunction message is generated if the turbidity value does not fall to below the target value within a defined time limit. If the brewhouse is not occupied then a message is sent to the on-call mobile and the master brewer can access the process externally through his laptop.

The appropriate process for every requirement

Various turbidity measuring processes can be fundamentally used for application in the lauter tun as the tolerable solids content of the wort is not the same in every brewery. The requirements of the turbidity measurement differ according to beer type, recipe and production process.In one application it may be sufficient if relatively high turbidity increases are recognised during slicing or sparging. Other applications require a finer turbidity measurement as the purifying process is controlled in more detail, e.g. by an adjustable raking machine and differential pressure measurement between wort level and false bottom.

If the turbidity of the wort to be measured is very low based on production, or if the process has to be controlled differentiated. For these applications the four-beam turbidity meter ITM-4 is recommended by Anderson-Negele. The meter operates according to the 90° scatter method, whereby the turbidity values in the range of 0...1250 EBC are measured. The reading is emitted as a 4...20 mA signal according to the preselected measuring range and, in addition, any threshold value can be analysed using the digital signal. ITM-4

ITM-51: The economic solution for medium and high turbidity

If the recognition of higher turbidity, as frequently occurs in the event of a breakthrough of the filter cake, is sufficient for the control of the purifying process then the Anderson-Negele turbidity meter ITM-51 can be used as an alternative. The meter operates according to the so-called backscatter principle and is suitable for turbidities over about 500 EBC.Regarding the functional scope, no compromises have to be made with the ITM-51 with respect to its “big brother” ITM-4. Display, analogue output and a freely adjustable switch output are also included here as standard. The EHEDG certified, metallic sealing G1/2" CLEANadapt process adaptation also provides an absolute front flush mounting, easy to clean build-in situation. No separate flow valve is required for the connection to the process. This usually takes place over an economical weld-in sleeve or over a suitable adapter for valves that are already present. ITM-51

Anderson-Negele turbidity meters are proven and reliable and are used for the continuous monitoring and control of many processes in drink production. The wear-free LED technology and the materials used (sapphire glass optics) make Anderson-Negele turbidity meters both maintenance friendly as well as impervious to drift and build-up and guarantee reliable operation, even after many CIP/SIP cycles. Expensive lamp replacements that are popular in other procedures now belong to the past.The typically straightforward Anderson-Negele service, the few necessary parameters and the compact execution define the ITM-3 and ITM-4 meters with high practical use and guarantee fast start-up and simple maintenance. 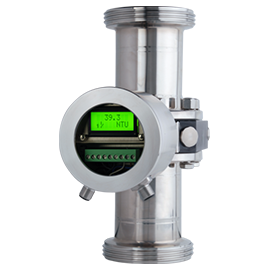 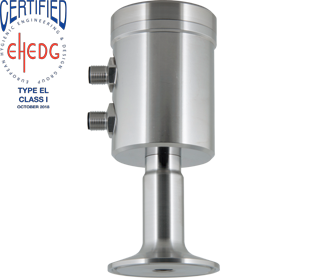