Yeast harvest in breweries with ITM-51 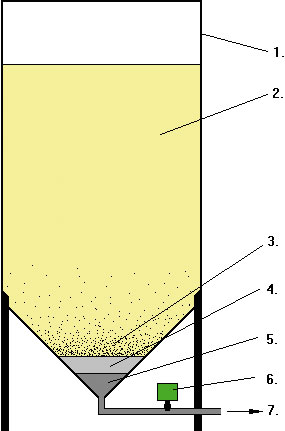 During fermentation, the yeast pitched into the wort multiplies two to threefold through respiration of the oxygen dissolved in the wort. When the wort extract is fully fermented, the young beer is cooled down and the yeast settles in layers on the bottom or cone of the tank. The lowest, densest layer consists of dead yeast cells. The middle and still very dense layer consists of living yeast cells with a high fermenting power known as “white yeast”. The upper layer, or light brown yeast, is mixed with beer and is less turbid (Fig. 1). During the first yeast harvest, the bottom two layers are carefully extracted and separated because the white yeast is reused, or even marketed, as so-called “pitching yeast”. During the storage and ageing period, the remaining yeast largely settles out as brown yeast. When the tank is emptied, the brown yeast is carefully separated from the beer as this has a major impact on the beer quality. Many breweries still monitor yeast harvesting manually. The process is controlled by checking the turbidity through a sight glass.

Due to differences in the number of yeast cells and in the density of the yeast layers, turbidity measurement can be used to differentiate between the layers (Fig. 2). For this purpose, an ITM-51 turbidity meter is installed at the fermentation tank outlet. It continuously measures the turbidity in % and outputs the measured value as a 4-20 mA analog signal to the process controller. By simply adjusting the setpoints, the yeast harvest can now be controlled precisely, reproducibly and automatically.